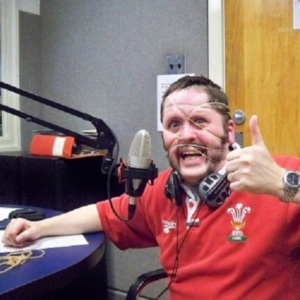 The Wild Welsh Willey Show was originally conceived and written by Will Llawerch to be a 10 episode tv series complete with Established and Up-and-coming Welsh Talent, Special guests, Outrageously Bogus Guests, Comedy Sketches and Live music. However, in the days before "Gofundme" and "Kickstarter" style sites, it became evident quite early on that it wasn't going to happen anytime soon (1998)
In 1999, Willey met Laurance and convinced him to help him record 10 episodes of a "Radio Show" which could be used as a calling card for talent.
"The idea being, if I could generate some real grassroots support with no budget, someone might think... "Blydi ell mun, imagine what they could do if they had some proper funding like!" says Will.
Remember, the show was originally designed so that people would tune in the following week hoping it might get better.
The project lay on a shelf 12 years until the lovely people at Ambron Radio got to hear of it and gave us a chance!
We have recently re-recorded and refreshed the original material and hopefully listeners will enjoy it as something unique and funny.
Wednesday
15:00 - 16:00
The Wild Welsh Willey Show
Friday
18:00 - 19:00
The Wild Welsh Willey Show