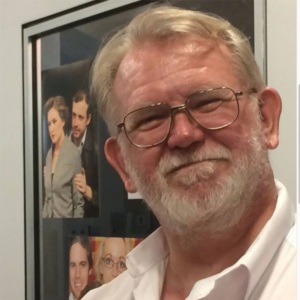 Hi folks, Simon Anthony here. I’m a sort of actor, at least these days. I’ll probably tell the full story at some point. If I can get at my tapes you may be able to live along with part of it day by day. For a number of years I made an audio diary back in the 70s and 80s and I plan on transmitting them. Those recordings are in dire need of curation as well as digitisation but until those tasks are done I have some examples of my thinking ready for you to listen to. Every Monday, Tuesday and Thursday at 7pm I have a slot for broadcasting the results of my introspection. The first lot is comedic, then some musing, then I have a five part children’s story - but the order may change.

I’m a techno geek and have been for the last sixty years or so. My parents started it off, my Father by working in the BBC and my Mother by recoding bed time stories on to open reel tape for me when I was three. I still have the tapes. I joined the BBC myself in 1978 and you will have already have seen my work if you are old enough and had a TV licence - or watched old episodes of Dr Who. I was a Video Tape Engineer, recording and transmitting anything the went out on BBC1 or 2 for over a decade. I’ve also worked for ITV, Central TV - until they ran out of money to pay me. Then I worked as what I thought would be the technical support for a Special Need college in the Midlands, but actually became the teacher during my initial interview… I’ve written software, computer articles, exams, student reports and comedy for ages. Only today my Apple Registration ran out due to my not paying for it. siwriter.co.uk is still a live website, but I’ll need some dosh to get it back on the AppStore. Anyway, that’s me, at least so far. I’ll fill in the rest at painful length - if I can find the tapes. I act now because I can’t manage to advertise my splendid web development skills well enough and I’ve not found a college that requires my brand of lecturing since my wife and my return after over four years living in Sydney - but more of everything later.
Monday
19:00 - 19:30
Torty Talks
Tuesday
19:00 - 19:30
Torty Talks
Thursday
19:00 - 19:30
Torty Talks